Stories from the field – Suriname 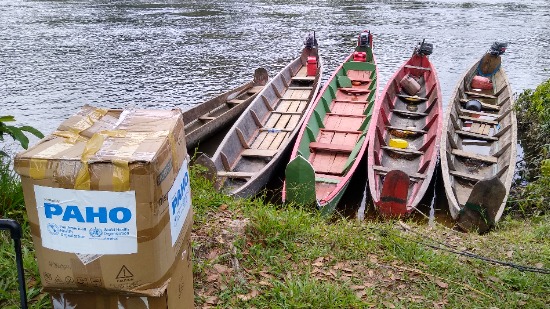 This need has been particularly demonstrated in Suriname with the support of PAHO/WHO.

Suriname is a relatively small country in north eastern South America with a population of 600 000 which gained its independence from the Kingdom of the Netherlands in 1975. The historical connection with the Netherlands has meant that Suriname maintains Dutch as its official language for administrative and educational purposes. Suriname shares a border with Guyana on the west, French Guiana to the east and Brazil to the south, each with its own language. Suriname is also a member state within the Caribbean Community (CARICOM) – a grouping of small states in the Caribbean that are predominantly English-speaking island states.

As with many other countries in South America, Suriname struggles to effectively patrol its borders, so there is continuous movement of people across these borders, and with this, an influx of multiple languages.

Leah-Mari Richards, Advisor for Health Systems and Services, shared that “The PAHO office struggles to get health care workers on the front line to keep up with the new and emerging technical knowledge distributed at regional and global level.”

So Richards and her colleagues were delighted when they saw the COVID-19 courses being launched on OpenWHO, and how frequently they were being launched.

Under normal circumstances, and in non-pandemic times, Suriname health care workers would have the time to take these courses online and follow them in English. Richards noted: “But during the COVID-19 pandemic we had to be practical; it is much faster and easier for anyone to understand technical knowledge when it is in one’s mother tongue, especially in a pandemic.”

PAHO Suriname, through the leadership of Richards, translated 5 courses from the OpenWHO platform into Dutch, and the uptake has been very positive. The Suriname Nursing School included the OpenWHO course on Infection Prevention and Control as a mandatory course for all students prior to being deployed to assist with the COVID-19 response. Four other courses have also been translated and the Ministry of Health has been highly appreciative of the support.

However, Richards concludes that “one thing that I have learned is that this is just the beginning ... because there are many other languages (and dialects) spoken in Suriname so through this experience, the PAHO Suriname office is now more cognizant of the value of language in all of our work with health care providers and communities and how language can really impact acceptance and understanding of new information and contribute to achieving expected outcomes.”

Read other Stories from the field